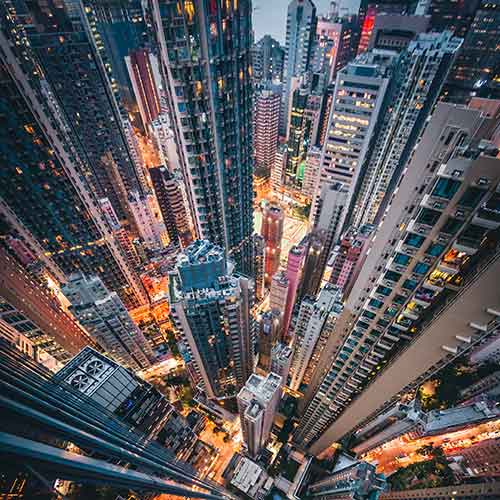 With more than 1 million people moving into cities each week and 60% of the population expected to live in urban communities by 2050, urban planning is quickly moving into the development of smart cities.

Smart cities provide essential elements for managing a dense populations while increasing safety, maximizing energy sources, reducing waste and expanding connectivity. And most of these systems depend on the new 5G technology and the IoT.

When we think about 5G most of think about faster speed for our mobile devices. The 5G phone will be 1000 times faster than 4G. To put that in perspective, you’ll be able to download a full-length movie in 17 seconds vs. 6 min with a 4G connection. But, the quicker speed is only the tip of the iceberg with how 5G technology will revolutionize our lives.

Dedicated Short Range Communications (DSRC) would not be possible with 5G technology. This new technology allows cars to communicate with each other about road hazards as well as traffic conditions. For example, if there is a fast-moving vehicle approaching an intersection those vehicles are aware of each other and slow to allow the faster car to pass avoiding a possible collision. Not only that, traffic lights will send alerts to vehicles about pedestrians and bicyclist crossing roadways. And sensors will communicate possible safety hazards due to road conditions. All of these communication advances are made possible with cell towers powered by 5G technology.

Because of the sensor communication between cars and city infrastructure, streets lights using led lamps will be able to dim or brighten based on movement — a significant cost saving for cities using this technology.

You’ll call upon the parking genie less when looking for that parking space. Street sensors make easy to know when a parking spot is available on a city street, so you don’t have to circle the block looking for a space that doesn’t exist — decreasing road traffic and congestion in densely populated areas.

There will be a vast amount of data collected from IoT sensors placed within the city. Not only will the city recognize when traffic is increasing or decreasing, but there will also be sensors installed to know when public waste needs to be collected, meaning city waste management doesn’t have to stop at each collection site just to pass by dozens of receptacles because there is nothing to collect. And with the increased data collection urban planning officials will more efficiently monitor how the population is increasing or decreasing citywide to plan citywide growth and amenities.

Isn’t it the most frustrating thing to have your WiFi connection slow during peak periods? Well with an influx of people moving to urban populations that will only worsen. But, with the introduction of 5G technology, it will allow a greater load to be carried over cell networks at faster speeds so that you won’t experience lagging data. Which is also the reason why having a city connected by IoT technology can only be sustained by 5G technology. Otherwise, we wouldn’t be able to support the strain placed on current cell towers.

These are just a few examples of how 5G technology is going to change the way we live. As we begin to roll out smart cities, the world will change around you, and you probably won’t even be aware of it happening.

When you able to get your new 5G capable phone in your area, think of it as just the beginning of a new age in technology.